Nationalism and globalism are the polarising -isms of our times, replacing (according to bestselling author Yuval Noah Harari) even the traditional political divide of conservatism vs. liberalism. With nationalism on the rise again, innovative solutions have become necessary to address global existential challenges that no country can address on its own. 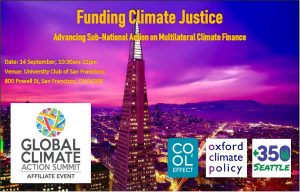 How, for instance, do we tackle a global existential threat like climate change in a world of rising nationalism? Multilateralism, in the form of the Paris Agreement, delivered only national determination as countries bunkered down and refuted any top-down, global determination of responsibility. But even this “global-lite” version of multilateralism was rejected by staunch nationalists in the US.

In response, globalists have rallied to offer sub-national action as an alternative. The Global Climate Action Summit (GCAS), which just took place in San Francisco, was a celebration of pledges from sub-national entities – cities, states, businesses, and individuals – to act against climate change. The Summit gathered an impressive list of commitments, from ambitious targets for carbon neutrality, to the use of green bondsand pension funds to build more climate resilient infrastructure and invest in renewable energy.

Although the pledges will not entirely make up the 28% reduction by 2025 (from 2005 levels) promised by the US under the Paris Agreement (which was already inadequate to meet the overall goal of the Paris Agreement to keep temperature rise within safe levels), they are important steps in engaging sub-national entities directly in the global fight against climate change.

A sub-national call to arms is not, however, a substitute for multilateral negotiations. As was evident at GCAS, such voluntary action may not heed the delicate balance of priorities that is necessary and can be achieved in a multilateral setting where all countries are formally represented.

For instance, the vast majority of ambitious announcements made at GCAS relate mainly to mitigation action – including target setting, and the US$ 4 billion pledged for mitigation by philanthropies. In the absence of adequate representation of the world’s most vulnerable, it is easy to forget that in addition to the “mitigation gap,” there is an adaptation gap, and a climate finance gap. This is recognised in the Paris Agreement, which includes a hard-won balance between adaptation and mitigation; and an emphasis on the importance of adequate finance for both mitigation and adaptation.

While a multilateral setting is essential to give equal voice to all, sub-national entities can still take a cue from the global negotiations and strive for more balance in their pledged action. A GCAS affiliate event on “Funding Climate Justice: Advancing Sub-National Action on Multilateral Climate Finance”, organised by Oxford Climate Policy (OCP), 350 Seattle, and Cool Effect on 14 September pointed to ways in which sub-national entities can contribute to the neglected area of climate finance – in particular to climate finance for adaptation, which is unlikely to attract private sector contributions.

As OCP Director Benito Müller pointed out while introducing the event, the multilateral negotiations are currently fraught with distrust – in particular, the discussions on climate finance. Sub-national entities can help dissipate the distrust by contributing finance that can be relied upon and is delivered through channels trusted by developing countries, such as the multilateral funds that serve the Paris Agreement.

Alex Lenferna, 350 Seattle, said California Governor Jerry Brown’s claim that the pledges made during GCAS would meet the US commitments under the Paris Agreement are not quite accurate. The commitments made for climate finance, critical for increased ambition in developing countries, have not yet been met. As one of the wealthiest countries in the world, and the country with high responsibility for climate change, he called on the US to contribute its fair share.

Jodi Manning, Cool Effect, described a proposal for a crowdsourcing initiative, #STILLIN, that will allow individuals to pledge US$ 1 or more toward funding the gap caused by the current administration’s exit from the Paris Agreement. Contributions will be directed toward mechanisms such as the Adaptation Fund, she said, with an emphasis on supporting projects that directly help people most effected by climate change.

Massachusetts State Senator Mike Barrett then described a Bill he has authored, calling for a  Massachusetts-UN Least Developed Countries Fund (MLDCF) to be established under Massachusetts state law.  Describing the idea as “disarmingly simple”, Senator Barrett said the bill proposes to add a new “check-off” option to the six options involving other good causes that are already included on Massachusetts state income tax forms for the convenience of taxpayers who wish to make donations over and above their income tax obligations. He felt the idea had a good chance of going viral and travelling across state borders, as all 42 US states with a state income tax provide optio

ns for contributions on their income tax forms; and many US citizens would like to push back on the home-grown populism advocated by President Trump. The MLDCF would be legally constituted to receive other gifts, grants, and donations to the Fund as well, and all contributions would then be relayed to the UNFCCC’s Least Developed Countries (LDC) Fund.

Müller introduced the Western Climate Fund, a regional instrument proposed by OCP in collaboration with the Chair of the LDC Group, to collect “share of proceeds” from carbon policy instruments such as the sale of emission trading permits, or carbon tax revenue. He described efforts by OCP to bring on board the Canadian Provinces and US States of the Western Climate Initiative, with the aim of collecting funding for the multilateral funds serving the Paris Agreement. Québec, one of the states participating in the WCI, had already contributed Cdn$6 million to the LDC Fund during the Paris Climate Conference, Müller said, and efforts are underway to make this a more regular contribution on the basis of a fixed share of proceeds from trading, and from more states and cities. This could provide up to US$ 96-125 million annually, he estimated.

The three initiatives described at the meeting are “innovative sources” of climate finance. The idea of resorting to innovative solutions to fund sustainable development is at least as old as the Brundtland Commission report. Given the urgent threat that climate change poses, and the high estimates of finance needed to address this challenge, it is an idea whose time has come.

In the panel discussion that fo

llowed, facilitated by Achala Abeysinghe from the International Institute for Environment and Development, LDC Chair Gebru Jember explained why climate funds should be channelled through the financial mechanism of the UNFCCC, saying this will increase the chances of all countries accessing the funds (not only “donor darlings”); allow greater national determination of priorities; and enable the funds to be democratically governed by all countries, to ensure easier access. Tosi Mpanu-Mpanu, Board Member of the Green Climate Fund and former LDC Chair, agreed, saying certainty with international climate finance will allow developing countries to make their Paris Agreement contributions more ambitious.

Perhaps, then, sub-nationals can play a vital role in building a bridge between nationalism and globalism. But, as Heather Coleman from Oxfam America concluded at the meeting, addressing climate change will not only need divestment from fossil rules, but also investment, particularly in minimising climate impacts on poor and vulnerable populations.