Should the Adaptation Fund seek accreditation with the Green Climate Fund?

The Kyoto Protocol Adaptation Fund (AF) was established to finance concrete adaptation projects and programmes in developing countries that are particularly vulnerable to the adverse effects of climate change. Its first projects were approved in September 2010. It has since allocated $265m in 44 countries with project sizes ranging between $0.7m and $10m, i.e. for what the Green Climate Fund (GCF) refers to as ‘Small and Micro Projects’ (less than $10m).

From the very outset, the AF was innovative in a number of ways:

The AF has evolved to fund smaller-scale innovative adaptation projects and has dedicated processes that can accommodate this scale. The transaction costs for small- and micro-projects can be high, and need dedicated systems and monitoring. The AF has also developed a nurturing environment for direct access and a network of peer-to-peer learning among developing countries. The AF allows for countries to ‘learn by doing’ in a lower-risk environment – pure grants, adaptation only – all within the confines of a performance-based monitoring system.

The main problem facing the AF in the near to medium term is that it has been let down by the inability of developed countries to support the CDM credit price; which at its peak was over €14 per ton, but has since been reduced to currently below 50 cents per ton. Having said this, it is important to emphasize that this issue should not be used as an argument against ‘international innovative funding’, but against putting all one’s eggs into one (carbon-market-based) basket. This is why the provision of predictable GCF ‘core funding’ for the AF is key to a sustainable future for the AF.

There appears to be a convergence of opinion among AF Board members that accessing such a core funding stream from the GCF would be desirable, if not essential, for the near- to mid-term survival of the AF, which currently has funding for another 18 months of operations. However, there is still a difference of opinion on how best to access such funding. On 2 March 2015 the AF Board decided to request its Secretariat for a further assessment of the two main options that have been under consideration, namely:

During the twenty-fifth AF Board meeting, a lively in-depth discussion of these issues began at an informal ecbi Seminar on 8 April (co-hosted by the incoming AF Board Chair) and was taken up in formal plenary on 10 April. In the course of these discussions it became clear that there are two quite distinct issues preoccupying Board members in this context, namely:

So the Board decided (Decision B.25/21) at the end of the formal discussions to request:

These discussions also highlighted the need for clarification of the nature of the two main options [A] and [B] under consideration. Given the context in which these two options are presented, one might be tempted to interpret them as two independent ways of obtaining GCF funding. This, however, would be to misread the reality of how GCF funding can be accessed.

Option [A] (GCF accreditation), would obviously suffice for accessing GCF funds. However, it would be wrong to think that option [B] (entering some MOU or agreement) on its own i.e. in the absence of accreditation, could achieve the same.

Why? For one, the very first paragraph of Section D on ‘Access modalities and accreditation’ in the GCF Governing Instrument stipulates that ‘[a]ccess to Fund resources will be through … entities accredited by the Board.’[2]

Moreover, as explained in Accreditation to the Green Climate Fund  November 2014 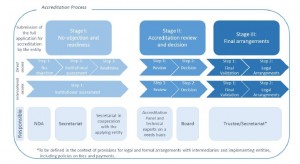 Figure: The Three Stages of GCF Accreditation (click to enlarge)

Given this, it is difficult to see how the GCF Board would allow an entity to access funding without that entity having undergone these assessments and reviews.

The point here is simply that on its own an MOU [B] is not a stand-alone option for accessing GCF funds.

As it happens, [B] actually is a viable stand-alone option, but for a different purpose. The fact is: the GI paragraphs referred to in [B] do not relate to accessing funds, but to ‘A. Complementarity and coherence’. Paragraph 34, in particular, states that:

The Board will develop methods to enhance complementarity between the activities of the Fund and the activities of other relevant bilateral, regional and global funding mechanisms and institutions, to better mobilize the full range of financial and technical capacities.

[b] – that is, making the best use of complementarities between the GCF and the AF – is independent of [a] – accessing GCF funds – and requires separate arrangements, presumably under paragraph 34 of the GI, as referred to in Option [B]. Ideally, such arrangements could be made in order to designate the AF as the main multilateral ‘retail agent’ of the GCF for concrete micro adaptation projects. This would relieve the GCF of the need to deal with such projects and enable it to focus on larger-scale activities/programmes instead.