The Paris Agreement has all the key elements of the Dynamic Contribution Cycle, but it fails as it stands to harness fully their potential to ‘ratchet up’ country contributions. However, this can easily be remedied.

In August 2014, a number of senior developing country negotiators developed an idea for sequencing contributions in the Paris Agreement at the tenth anniversary ecbi Oxford Fellowships and Seminar. They published it as “A Dynamic Contribution Cycle” (DCC), with Xolisa Ngwadla (South Africa) and Jose Miguez (Brazil) as lead authors.

The DCC idea was submitted to the UNFCCC on 6 November 2015 as part of the Views of Brazil on the Elements of the New Agreement under the Convention applicable to All Parties (for a summary, see below). The submission states that ‘the agreement itself must provide for the procedures to enhance ambition over time, … . Brazil recognizes it is important to avoid “locking in” contributions in the long term. It is also important to avoid that successive cycles of contributions become subject to renegotiations and political bargain. With a view to addressing these issues, Brazil proposes a “dynamic contribution cycle”, based on ten-year periods, with two five-year contribution terms. The purpose of this approach is to allow the adjustment of contributions with a view to enhance ambition, while providing long term perspectives for Parties and stakeholders.’

How did the DCC idea fare in Paris?

As elaborated in a recent OCP/ecbi Discussion Note on A Dynamic Ambition Mechanism for the Paris Agreement , the idea proved to be a key influence on what might be called the “Contribution Framework” the Paris Outcome. The Discussion Note analyses this Contribution Framework with respect to certain key ambition features of the DCC proposal, namely:

The Contribution Framework thus uses the key ambition tools of the DCC, but divided between the two tracks, with the result that the rolling medium-term time horizon is only used in the §23 track, while synchronised updating is confined to the §24 track.

The shortcoming of the §23 track, i.e. its failure to incorporate a synchronised updating process, can be remedied by simply adding every five years the request to update the next NDC, as illustrated in Figure 2.a. 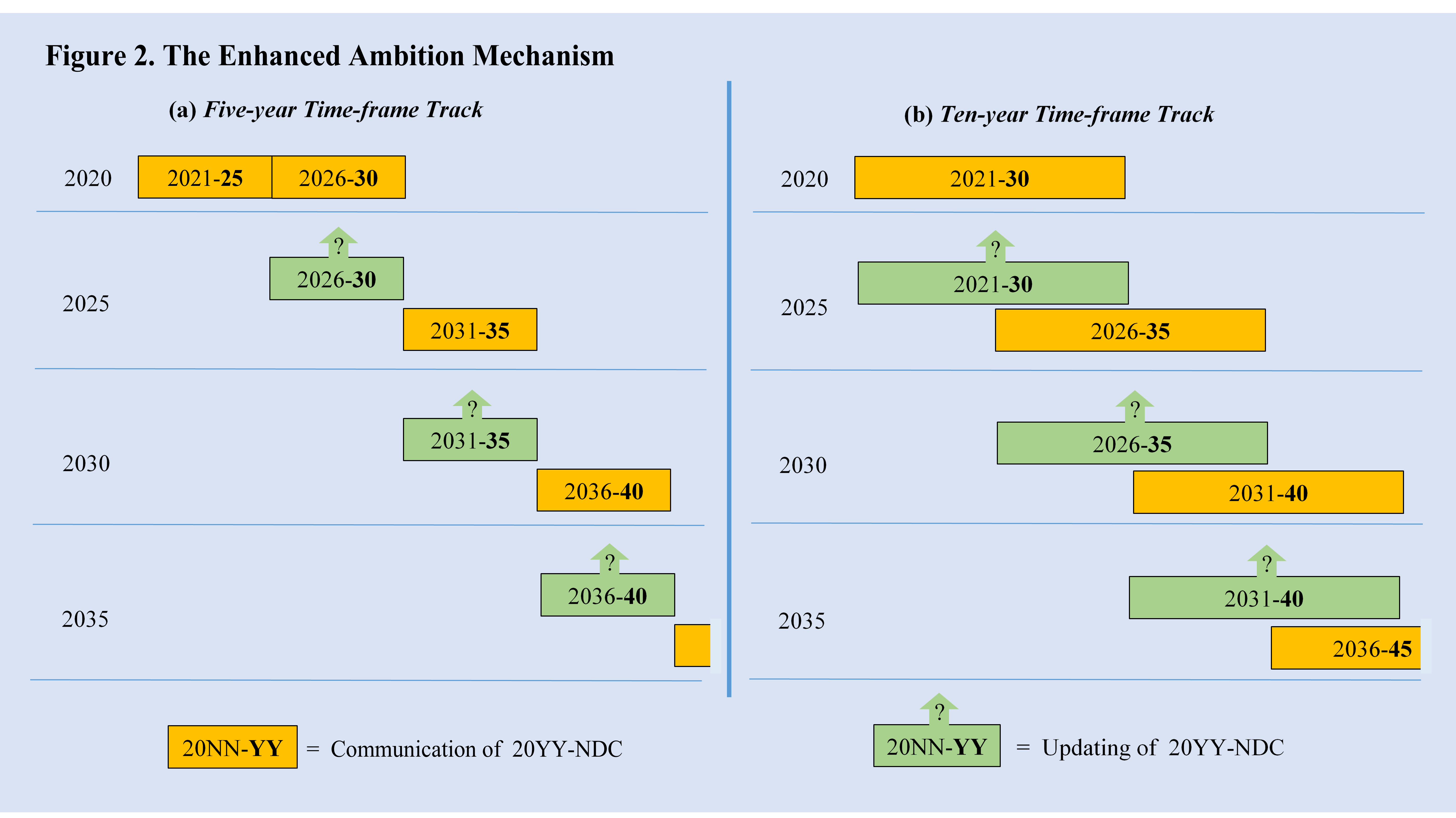 The situation may seem more problematic in the case of the §24 track, where the issue is not updating but the lack of a running medium-term time horizon. But again, this can be fixed.

To explain this in concrete terms, take the case of the EU NDCs. Given the INDC submission, it stands to reason that the EU will adopt a §24 track ten-year time-frame for its NDCs, beginning with a 2030 NDC of a 40% reduction with respect to the 1990 base-line between 2021 and 2030, meaning that the average annual EU emissions over that time-frame will not exceed 60% of 1990 emission. The problem with the §24 track as it currently stands is that there may be no communicated medium-term indication as to how the EU NDC is going to evolve after 2030 until 2030, when a new NDC will have to be communicated. Given the Kyoto Protocol experience,[1] this is  sub-optimal as regards ambition and durability of the Agreement, but fortunately it can also easily be remedied.

According to §24, there is  a communication or updating of NDCs every five years. But which is it to be? Following the EU’s original ‘mid-term review’ idea, one could expect  an updating of the 2030 NDC. While this, on its own, would be sufficient to satisfy §24, it is important to keep in mind that the language of §24 does not imply that one could not simultaneously do such an update and communicate a new NDC! Indeed, it would be perfectly possible to communicate a 2035 NDC with a ten-year time frame, a reduction of, say, 60% below 1990 benchmark, in the sense of average annual emissions between 2026 and 2035 not exceeding 40% of 1990 levels.

In other words, it is possible to make mid-term communications of  new  NDCs under a ten-year time-frame track because there is no reason, in principle, why time-frames cannot overlap, as illustrated in Figure 2 (b).

In negotiation terms, the full potential of the DCC ambition tools could be harnessed simply by requesting all Parties in 2025 to communicate a 2035 NDC and update their 2030 NDC, and to do so every five years thereafter.

It is in this sense that we are pleased to see the DCC proposal to have emerged with the yellow jersey (‘maillot jaune’) from the ‘Tour de Paris’.

[1] One of the main shortcomings of the Kyoto Protocol was precisely that there was no ex-ante indication on the ambition of the second commitment period until the first one was about to expire, which led disruptive uncertainties, and indeed speculations that there will be no second period at all.

Brazil proposes a “dynamic contribution cycle”, based on ten-year periods, with two five-year contribution terms. The purpose of this approach is to allow the adjustment of contributions with a view to enhance ambition, while providing long term perspectives for Parties and stakeholders. 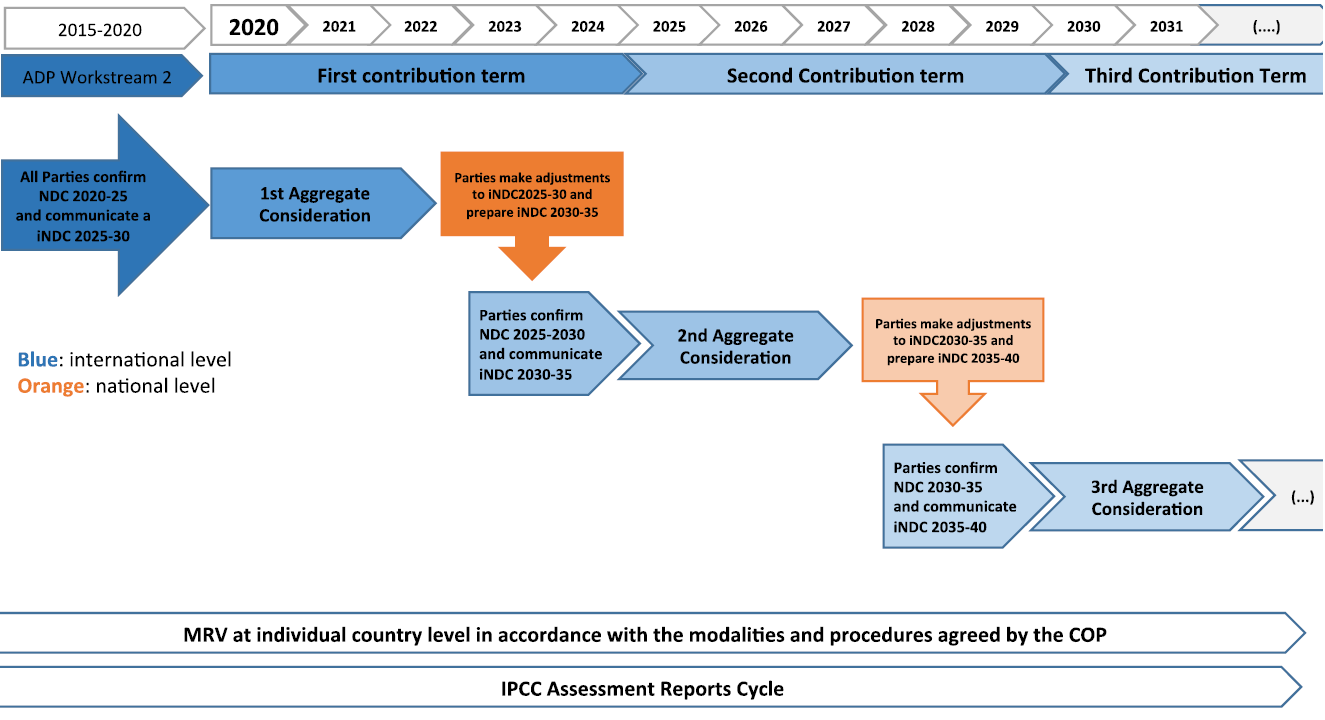 During the implementation phase of the new agreement under the Convention, the COP shall regularly assess the aggregate effect of the NDC towards achieving the objective of the agreement, with a view to inform Parties in adjusting their NDC towards enhancing ambition in all pillars of the Convention.

The first session of the Aggregate Consideration Process shall start in 2020 and finish no later than 2023. The outcome of the Process would be a set of decisions or recommendations to be taken into account by Parties when adjusting their NDC, in accordance to the cycle outlined above in section Dynamic Contribution Cycle

The Aggregate Consideration Process shall be conducted consistent with science and on the basis of equity and be guided by:

Beyond the general topics above, it may not be necessary to detail all aspects of the Aggregate Consideration Process in the agreement itself. The agreement may mandate the COP to agree, before 2018, on the modalities and procedures of the aggregate consideration process, including, as appropriate, the adoption of a simplified methodology for each country to calculate its share in the global average temperature increase.

[1] Because the expression “intended NDC” has been associated with the proposal of a ex-ante review prior to Paris, we have preferred to use the expression “indicative contribution” to highlight this is a different approach. Nevertheless, both expressions refer to a similar concept, i.e. a NDC that is yet subject to changes.