The Paris Cycle-wreck: beyond (partial) salvage?

In my last blog (‘Finance in Paris’) I lamented the weak finance outcome of the recent UN Climate Conference in Paris. In this two-part blog, I want to strike a slightly more upbeat tone by looking at and reconsidering two ideas that emerged after the May 2015 publication of the OCP/ecbi Think Piece: ‘The Paris Predictability Problem: What to do about climate finance for the 2020 climate agreement?’

Part I is about the (so-far) sadly ill-fated idea of a joint replenishment cycle for the financial mechanism of the Paris Agreement. The second idea from the May Think Piece (which will be dealt with in Part II) involves a shift in the paradigm of multilateral finance towards the inclusion of sub-national contributions. As indicated in the title of another recent OCP blog – ‘In Paris it became “chic” for sub-nationals to provide multilateral support for climate change finance. Now it must become “de rigueur”!’ – this idea has been rather more successful than the former.

The key point of ‘Finance in Paris’ was that obsessing about ‘collective quantified goals’ regarding overall flows of public and ‘mobilized’ private sector climate finance is chasing after ill-defined figures, leading to mutual assured unhappiness and acrimony; which is not only unhelpful to the process but positively counter-productive.

As well-intended as Gordon Brown and Hillary Clinton may have been – both in the run up to and at Copenhagen, when tabling the (in-) famous $100 billion target – the time has come to refocus the discourse on the much more modest and mundane issue of providing predictable public sector support, starting with public sector contributions to the financial mechanism. As a collective quantified goal,[i] ten billions of public sector funds in the hand is worth more than hundreds of billions in the private-sector-mobilizing-pathway-MRV jungle!

Indeed, this was one of the reasons why the senior developing country negotiators attending the 2015 ecbi Oxford Fellowships came up with the idea of the Paris Replenishment Cycle (see below) combining a focus on such public sector funding targets (in the form of replenishment envelopes) with a new institutional arrangement that could have been the institutional signature outcome of Paris.

But before I turn to the depressing saga of what happened to this idea in Paris, a few words about the other key motivation behind the idea, namely the ‘Paris Predictability Problem’.

The Paris Predictability Problem and some related strategic issues

This term was first used in the above-mentioned OCP/ecbi Think Piece which, among other things, argued that by far the most pressing problem with international climate finance for developing countries is ‘predictability’ (or rather the lack thereof) in the longer term.

Three of the four multilateral funds established by the UN climate change regime – the Least Developed Countries Fund (LDCF), the Special Climate Change Fund (SCCF) (both operated by the Global Environment Facility, or GEF), and the Kyoto Protocol Adaptation Fund (AF) – have, for some time, experienced problems in raising the resources necessary to fund a backlog of fundable projects in the pipeline. This is because they are relying on voluntary contributions which have not been sufficiently forthcoming,[ii] particularly since the arrival of the new and more glamorous Green Climate Fund (GCF).

But why, one might well ask, should these small niche funds be kept afloat? The short answer is: Because they would have to be resurrected if the financial mechanism is to deliver climate finance at scale! At a GCF COP 21 side event on Beyond Paris: GCF Looks Ahead Gabriel Quijandria, former GCF Board Co-chair, announced that ‘the Board’s aspiration is to expand its investment portfolio to USD 2.5 billion in 2016.’ While it is regrettable – as stated[iii] by Héla Cheikhrouhou, Executive Director of the GCF – that Paris has not delivered more clarity about the evolution of contributions to the GCF and the other UN Funds, it stands to reason that if a significant share of new multilateral funding for adaptation[iv] is indeed to flow through the GCF, then $2.5 billion would have to be a floor figure for the expected longer-term annual GCF throughput. 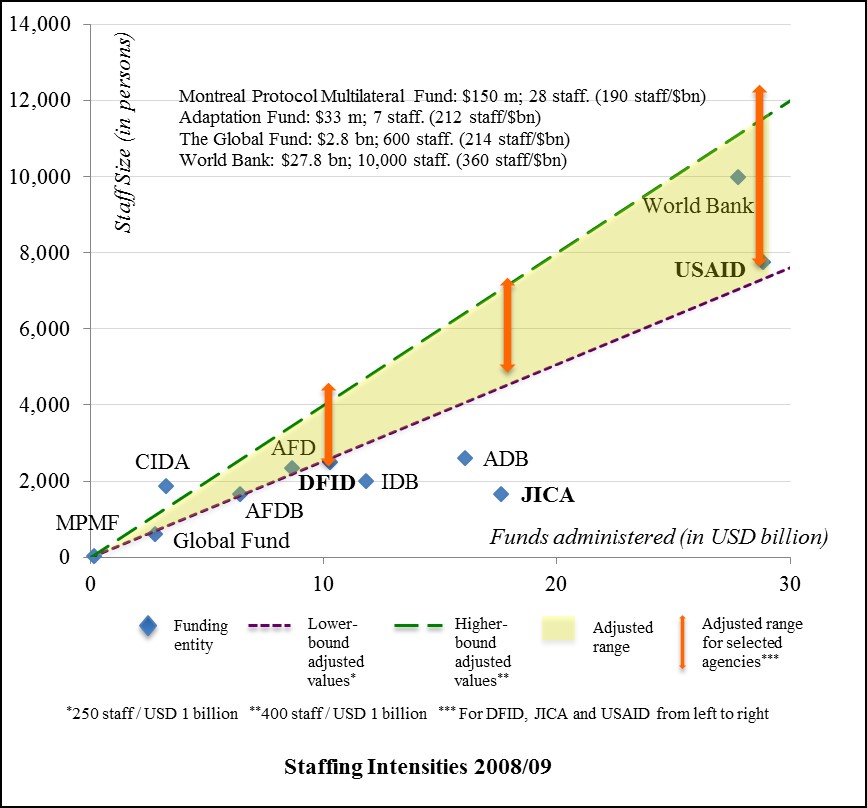 As shown in the figure above,[v] this would, in all likelihood, require between 500 and 800 administrative staff. Where should they be housed? Of course, one could try to do all the necessary work in-house at the GCF headquarters in Songdo. However, as I have argued again and again over the last five years (most recently in ‘On the Virtues of Strategic Divisions of Labour’) there should, and I believe must, be a division of labour between the GCF as wholesale agent, and other funding entities as specialized retailers. Such a division – be it in-country (preferably) through Enhanced Direct Access, or through designated international funds, in particular those that will be serving the financial mechanism of the new Paris Agreement – is necessary if the GCF, and ipso facto the financial mechanism, are to function at the required scale.

But such a division of labour can only happen if all the funds involved have a viable funding basis. The LDCF, SSCF, and AF received pledges in Paris which just about cover their backlogs,[vi] but voluntary contributions such as these are not a viable basis for serving the new Agreement, as was acknowledged by Minister Pa Ousman Jarju of The Gambia in a letter just after Paris. Political high-stake events, such as Paris, tend to loosen voluntary purse strings, but such contributions are highly unlikely to be repeated for some time to come.

The good news is that the need for enhanced predictability is being acknowledged beyond the confines of the recipients. Thus, in his plenary statement after the adoption of the Agreement, Miguel Arias Cañete, EU Commissioner for Climate Action & Energy, promised that ‘the European Union will scale up its level of financial support as of 2020 and make it more predictable’[emphasis added].

I do not know how the EU intends to do this, but I do fear a golden opportunity was missed in Paris, which brings me back to the 2015 ecbi Fellows’ idea of the Paris Replenishment Cycle.

As mentioned above, the idea of a joint replenishment of all the funds serving the financial mechanism of the new agreement – and not just the GCF – was developed in Oxford last August and it was published in an OCP/ecbi Concept Note in early October. This was followed by a Discussion Note on ‘Procedural Arrangements for the Paris Replenishment Cycle’ with a one-page Summary Brief which contains the following succinct and I believe perfectly clear description of what such a joint replenishment could look like:

Stage I: Principal Reviews and Guidance

In keeping with its core mandate to ‘assist the COP in exercising its functions with respect to the financial mechanism … in terms of improving coherence and coordination in the delivery of climate change financing, … [and] mobilization of financial resources’,[vii] the SCF could also play a facilitative role in the proposed subsequent two replenishment stages.[viii]

I continue to maintain that this is a pragmatic, down to earth idea about how to enhance the coherence, complementarity and indeed longer-term viability of the financial mechanism. So what went wrong?

The Paris Cycle-wreck and prospects for (partial) salvage

In the final days of the Conference the LDC Group, supported by AOSIS, put forward the idea of a Paris Replenishment Cycle three times for inclusion in the Presidency’s text, but to no avail. Initially, they asked for the establishment of such a joint replenishment cycle as complementing to the decision in the draft text that ‘a significant share of new multilateral funding for climate change actions should flow through the Financial Mechanism of the Convention and the funds serving the Agreement’ [para. 54 in draft Decision V2] – which incidentally also did not make it into the final outcome. The last attempt, at 1 a.m. on Saturday morning, the LDCs’ request was merely for a COP decision to consider the idea at COP 22 in Marrakech, but that was also rejected.

I have been told that one reason given for this course of events was that the proposal had been tabled very late in the day. Was it really only lack of time to familiarize oneself with the idea – which after all would have been possible under the final proposal by the LDC Group – or were there other motives and reasons at work?

I believe that there were probably elements of both, but I also feel that to dwell on the latter would not be productive at this stage, which is why I propose to treat it as spilled milk and to move on to the question of whether the idea could be salvaged, at least in stages. As it happens, by dropping Stage III, the process described above would, in my mind, still be very useful.

Could this sort of ‘Paris-light’ cycle of principal reviews and guidance with coherence and complementarity facilitation be salvaged from the Paris Cycle-wreck? In light of the fact that the finance spokespersons of both G77+China and AOSIS are reported to have announced that they would reserve the right to table some of the items that were dropped from the draft finance decision during the Paris end-game at the next COP or SBI (Subsidiary Body for Implementation), and given the support by AOSIS for the LDC submissions during these final days, I could imagine that this might be one of the items to be resurrected. At the same time, it would make sense to raise the idea, in particular with regard to Stage I, in the upcoming deliberations on an initial GCF replenishment at the GCF Board.

Of course all this would not solve the predictability problem of the small Convention funds, but it would be a very useful enhancement of the financial mechanism. The small funds would have to look for alternative sources of more predictable income, such as the ones I will discuss in Part II.

[i] As I emphasized in ‘Finance in Paris’, this not to say that countries should be prevented from showcasing how much they are doing in mobilizing private sector investments in this context. They can and should do so as part of their National Communications. The point here is simply that these overall flows should not be used to set targets.

[ii] The LDCF and the SCCF have always solely relied on voluntary contributions. The AF was meant to be replenished by innovative finance derived from the Clean Development Mechanism (CDM) but this has unfortunately almost dried up due to a lack of demand from developed countries.

[v] This figure graphically summarizes the findings of David Ciplet, Benito Müller, and J Timmons Roberts ‘How many people does it take … to administer long-term climate finance?’, ecbi Policy Report, October 2010, according to which it takes on average between 250 and 400 people to administer $1 billion, thus $2.5 billion entails 500 to 800 people.

[vi] In the case of the LDCF, for example, $252 million has been pledged in the run up to Paris, which is very close to meeting the current, near-term demand for resources as requested in the 33 project and programme proposals that have been recommended for approval by the GEF Secretariat. However, at present about $69 million is sought towards 13 new project proposals that have been endorsed by LDCs’ operational focal points and formally submitted for review by the Secretariat.

[viii] Note that the procedures proposed here are based on well-established, tried and tested procedures used in the replenishments of the GEF Trust Fund and other multilateral funds.